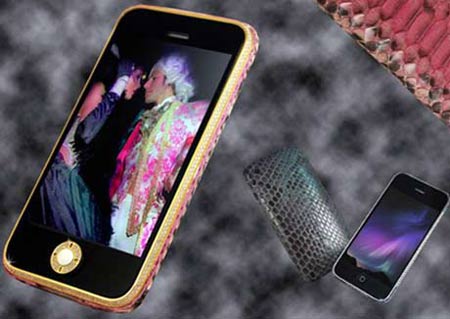 Apple’s revolutionary iPhone has taken the markets by storm since its launch. The newer versions further elevated the supremacy of the device. These Apple devices have emerged as style-imbued luxury masterpieces with Stuart Hughes designs.

Recently, the iPhone 3GS Supreme Rose was unveiled with an extremely heavy price tag. Well, now Stuart Hughes of Liverpool & David De Nizza of Milan bring the python iPhone in more colors. These new luxurious iPhones include a pink handset with 24ct gold bezel and Swarovski crystals. Several other handsets are embedded with sapphires and diamonds.

The rear sections of the python iPhones are not cases but are furnished by hand. Furthermore, the handset is wrapped in genuine snakeskin from python which originates from Indonesia and has been imported using the necessary documents.