The new Corning Gorilla Glass 4 which went official last month in the US and is already available on a couple of smartphones, is now making its way into India. The company is mainly eying local OEMs for creating new partnerships to get its latest product onto as many consumer devices as possible.

The Corning Gorilla Glass series has been a popular choice by most brands for use on smartphones and tablets. We’ve also see the protective glass layer in larger implementations such as laptops and TVs. The newly launched Glass 4 version is said to be 2 times tougher than the competition currently in the market. 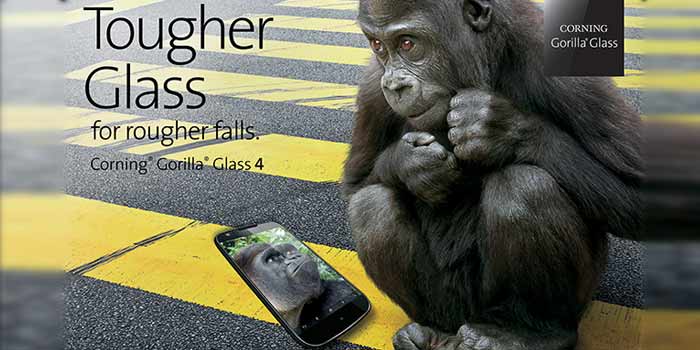 Not only that, it’s 25% thinner compared to its predecessor which is the Gorilla Glass 3, and somehow manages to offer twice the damage resistance. The new design is basically created to address the biggest issue which is screen breakage from everyday drops. From tests conducted by the company, the Glass 4 survives shocks around 80% of the time. On the other hand, soda-lime glass has a 100% chance of breakage on each run.

The president of Corning Technologies India, Amit Bansal, says that the country is ‘one of the fastest growing consumer electronics markets in the world,’ which is completely true. This is why the company sees it as a viable location to offer its latest cover glass technology, especially to local OEMs. Most brands in India are known for using Dragontrail glass, a cost-effective alternative from Japanese company Asahi.

Just a couple of days back, Corning disclosed that the Galaxy Alpha from Samsung was the first handset to use its Glass 4. The Note 4 has also been given the same treatment; but it’s quite weird that the company only recently revealed its new product while the two smartphones have been on shelves for months.

Depending on how well Corning prices its Gorilla Glass 4 in India, we might see it arrive on a plethora of devices including smartphones and tablets from local manufacturers by early 2015.