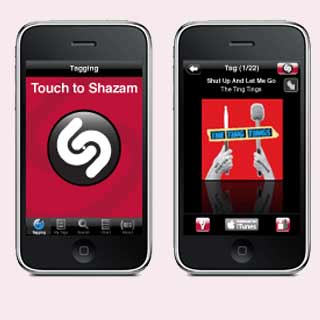 “(RED) enables consumers to positively impact the lives of those living with AIDS in Africa through their purchases of products and we are incredibly honored to be the first mobile app company to partner with them. Given our popularity and that we already have more than 10 million iPhone and iPod touch users around the world, (SHAZAM) RED is a powerful way for our audience to create real change in the world,” explained Andrew Fisher, CEO of Shazam.

“In the three years since (RED) launched, our partners and events have generated $140 million for the Global Fund, 100% of which flows straight through to AIDS programs in Africa. We’re excited to expand our reach further with Shazam, one of the most recognized and exciting brands in the digital space. Music is core to our brand, and (SHAZAM) RED will be another great way for music fans to make a real impact on the lives of those living with HIV in Africa,” stated Seb Bishop, CEO EMEA, (RED).

Shazam (RED) features a dedicated tab linking to a web page featuring more about the impact of (RED) and associated products and events. Further, while driving, users can also dock their iPhone to enter car mode and catch up with songs on the radio.

The Shazam (RED) special edition app will initially launch in eight languages across twenty two global markets. By purchasing this special edition app, users get the opportunity to donate 20 percent of the price to the Global Fund to fight AIDS, Tuberculosis and Malaria. The (RED) funds are directed to HIV and AIDS programs in Africa.

The app can be purchased from the Apple App Store for $4.99.