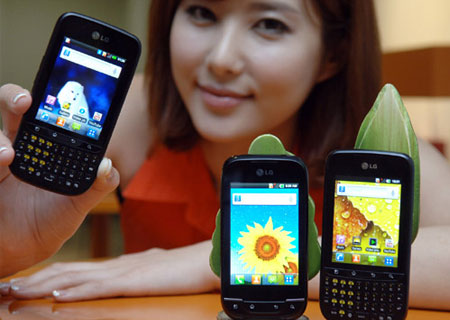 The LG Optimus range of smartphones received two new additions in the form of the LG Optimus Pro (LG-C660) and the LG Optimus Net (LG-P690). Based on the Android 2.3 platform, LG claims that these smartphones provide improved gaming and multimedia support along with better power management. Both devices are integrated with a 1500mAh battery and an 800MHz CPU.

Featuring a portrait bar QWERTY keyboard, the LG Optimus Pro gives users the advantages of both, a physical keyboard and a touch screen. For enabling quicker and easier work, the smartphone has email and scheduler hotkeys embedded in it. It has a display measuring 2.8″ and is available in white, tan and black colors.

“Today’s customers want genuine choice, phones with a different mix of features and technology for different segments of the market. And that’s precisely what we’ve done with Optimus Pro and Optimus Net, two completely new devices which enhance LG’s reputation as the company with an Android smartphone suitable for everyone,” opined Dr. Jong-seok Park, President and CEO of LG Electronics Mobile Communications Company.

The LG Optimus Net features LG Social+ which puts together popular social networking sites in a single widget on the homescreen. Users can conveniently switch between reading their friends’ news feeds and updating their statuses on the sites. A mere click also enables them to share pictures on different social networking accounts from the home screen. This smartphone with a 3.2″ HVGA display possesses the LG SmartShare function via which content can be easily shared with other devices supporting DLNA.

Available in white and black colors, the phone’s characteristics would differ according to various markets. Its North American version is slated to possess a QWERTY keyboard while those for the markets of Brazil, China, Asia and the CIS region would have dual SIM functionality. The phones for Europe would be Near Field Communication (NFC) capable for mobile payments.

The pricing and availability details of the LG Optimus Pro and the LG Optimus Net have not yet been disclosed. Starting from Europe, they are scheduled to be available in thirty markets globally.