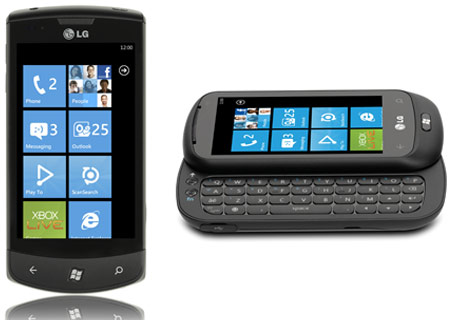 Windows Phone 7, the recently launched operating system has already made its way to several handset manufactures like Samsung, Dell and HTC. LG too joins the league with two of its latest handsets. The company has announced that the Optimus 7 and Optimus 7Q will be its first two smartphones operating on Microsoft’s latest operating system.

These two handsets from the Optimus series proffer 720p HD video resolution as well as a 16:9 as-pect to record and playback movies in pristine visual quality. The LG Optimus 7 equips a wide 3.8” WVGA LCD display, whereas the 7Q is fitted with a 3.5” screen. Both of them provide users an effective 800 x 480 pixels.

“We have designed LG Optimus 7 series to include a truly innovative sharing experience via the Windows Phone 7 environment,” commented Dr. Jong-seok Park, President and CEO of LG Electronics Mobile Communications Company. “Having worked closely with Micro-soft to develop these fantastic devices, we are thrilled to now be able to reveal our vision of what a true Windows Phone 7 should be.”

Sporting a 5MP camera with functions like Intelligent Shot and Panoramic Mode, handset owners can amuse themselves by capturing beautiful images. With 16GB of internal memory and a 1500mAh removable battery, these LG offerings house a plethora of features to offer non-stop entertainment. The LG Optimus 7Q has been crafted with a slide out QWERTY keypad for those who are uncomfortable with a virtual keyboard.

Andy Lees, President of the Mobile Communications Business at Microsoft, asserted, “We are very excited to be working with LG, a mobile phone industry innovator. Windows Phone 7 is designed to bring together what you care about most and LG is a key partner in making that experience a reality for people around the world.”

These two beauties are pre-installed with three applications including DLNA-based Play To, augmented reality (AR) and Voice-to-Text. With the Play To software, users can stream out multimedia files to other DLNA-enabled digital devices. Voice-to-Text wipes out the need for finger input as handset owners can dictate their replies which are then converted into text by the phone.

The AR application, ScanSearch proffers real-time information pertaining to entertainment, dining, weather, shopping, and banking. All of these can be procured as Live Tiles through the Windows Phone 7 OS. Several functions have been categorized into six Hubs by the platform including Pictures, Games, Marketplace, People, Music + Video and Office.

LG’s Optimus 7 and Optimus 7Q are expected to grace more than 35 countries through 100 global partners and carriers beginning with Europe and Asia from October 21.