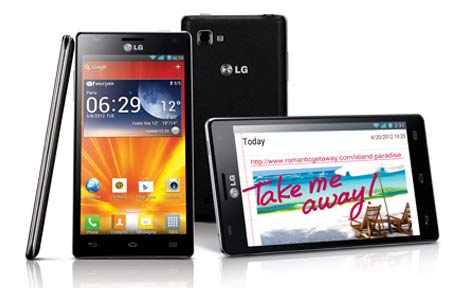 Announced back at the MWC 2012, the LG Optimus 4X HD smartphone will hit availability status in Western Europe by next month. Following its release in the said region, it will reach others parts covering Central and South America, along with CIS and Asia.

Running through its detailed specifications, the smartphone works on ICS and gets its fuel from a quad core 4-Plus-1 Tegra 3 processor. The fifth core of the CPU is reserved for saving the battery, along with an impending Eco-Mode. Hidden under its chassis is a 2,150mAh battery that deploys SiO+ technology for extending the operating time and energy density. As for the display, it’s a considerably large screen spanning across 4.7 inches.

“Beyond the fast processor, superb display and largest-in-class battery, the Optimus 4X HD is the first LG smartphone to feature the new User Experience (UX). As the smartphone segment consolidates even further, it’s becoming more and more apparent that both great software and great hardware are crucial to stay on top of the game. LG intends to be a strong contender in both areas and the Optimus 4X HD is our proof,” commented Dr. Jong-seok Park, President and CEO of LG Electronics Mobile Communications Company.

On the software front, the Quick Memo is a tool that can be activated as part of any application, inclusive of games or video players. Media Plex is an app dedicated to image and video streaming, with claims of providing an experience very similar to that found on a PC or laptop. There’s an 8MP snapper sitting on the back panel of this handset that supports DLNA and MHL technologies as well.

The exact LG Optimus 4X HD release date and price details have not been disclosed at present.