LG India has offered entertainment buffs a peek at all the Ultra HD TV and Smart TV models bundled with the WebOS platform, that it has lined up for launch in the country this year. If you can’t afford the prices, it’s time to look the other way in case you think you’d be sorely tempted to spend anything upwards from Rs 83000 for them.

The WebOS LG TVs were unveiled at the India Gadget Expo in Hyderabad, the same event at which LG also released its LED Smart TV with Full HD CINEMA 3D, and powered by the WebOS platform. The last mentioned is a Linux kernel-based OS which was originally designed by HP. The Ultra HD TVs boast of Ultra Surround Sound including 5.2 multi-channel audio systems tweaked to offer their best by harman/kardon. 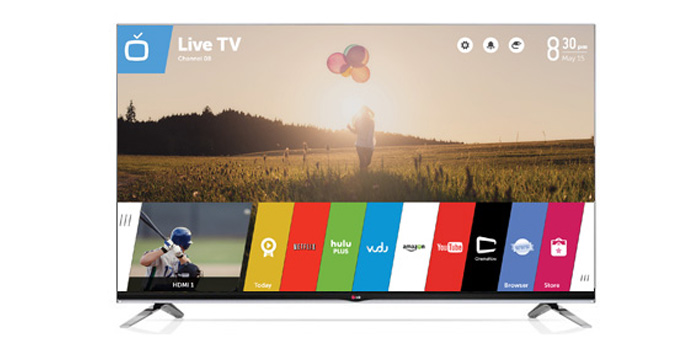 These LG WebOS TVs deliver 3840 x 2160p, that’s 4K resolution, visuals and are powered by LG’s Ultra HD Engine Pro chipset. So you’re wondering from where you’ll be able to get 4K resolution content to watch, right? An internal system converts standard HD and full HD videos to something close to 4K quality. You will be able to buy these models in screen sizes of 49, 55, 65, 79 and 84 inches, depending on how heavy your wallet weighs.

The LG WebOS TVs will be sold with 42-, 47-, 55- and 65-inch displays and offer a variety of options to users. There’s an intelligent Launcher Menu to start with; that’s a user interface to arrange utilities into a nicely viewable history, deliver access to the LG App Store for TV shows, movies and games, open a web browser and so on. LG boasts of having shipped over 1 million Web OS TVs since March 2014 and intends to have the platform on 70% of its smart TVs this year.

The LG Ultra HD TV models are priced between Rs 1.5 and 15 lakhs, while the WebOS Cinema 3D TVs will be pegged starting from Rs 82900 and going up to Rs 15 lakhs. You will be able to find LG’s 55-inch OLED TV in the market already and a 77-inch one will be landing within a week.