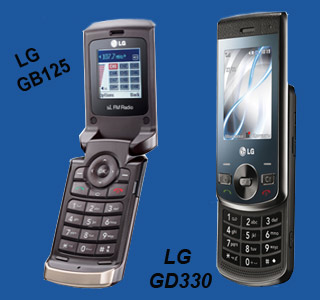 It seems that LG is looking forward to expand its range of entry-level mobile phones. According to Unwiredview, LG will be introducing two new mobile phones namely the LG GD330 and GB125. Very few details of both the phones are revealed but the images of the phones seems to be leaked.

Adorning a slider form factor, the LG GD330 phone may sport a 2.2 inch display screen. It is reported that the new phone may have similar kind of look and style as the LG Secret phone. Apparently, the phone features a 2 megapixel camera that should allow users to click clear images.

The LG GD330 phone may also integrate a FM Radio that will keep users in tune with the latest songs and updates. The phone might incorporate a pair of touch keys that should provide an easy access to users.

The LG GB125 phone may feature a 1.5 inch display screen as well as an external display screen. The clamshell device seems to integrate a FM radio and may be powered by 950 mAh battery. Whether the phone integrates a camera or not is unclear at the moment.