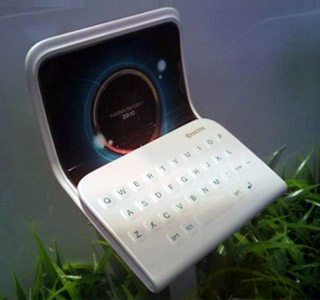 Mobile phone manufacturers are trying their best to develop unique concept phones, while keeping in mind its user friendliness as well as innovative features. Kyocera has recently unveiled its EOS phone that features a flexible OLED screen, which can be folded like a wallet.

The highlight of this phone is that it can be folded in different ways such as a traditional netbook shape or completely flat for viewing videos. The Kyocera EOS phone boasts of a tri-fold OLED design and when partially unfolded, the back surface of this phone functions as a QWERTY keypad.

Designed by Susan McKinney, the EOS phone is made up soft, semi-rigid polymer skin. The shape memory pops out the buttons when it is in use and bends in with the surface when folded.

The key feature of this concept phone is that, it derives its energy from human interactions. It is powered by Kinetic energy and works like a self-winding watch and converts kinetic energy into electrical energy through its piezoelectric generators.

Since the phone yet lies in the concept stages, the availability and pricing details of the Kyocera EOS phone are not yet revealed.