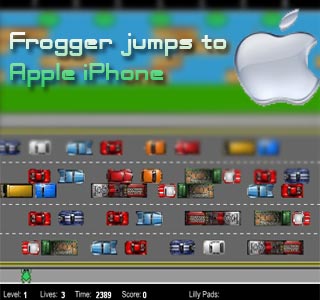 Hopping on to the iPhone and iPod Touch is Konami’s Mobile Fogger. A recent announcement by Konami Digital Entertainment confirmed the news. The game is the latest edition of the 27 year old successful series and top ten best-selling classic Frogger mobile games. The game will surely score high among the fans of the Frogger franchise as the gameplay revolves around the basic ‘why did the frog cross the road?’

Joe Morris, Vice President of Konami Mobile, mentioned, “We see the iPhone platform as an opportunity to showcase the legendary Konami brands in a truly unique fashion. Konami is committed to providing players with games that leverage the latest technology. Fans of the best-selling Frogger franchise can now experience the title like never before, and we look forward to releasing more of our popular titles for the iPhone soon.”

The first title by Konami to hit the App store, Frogger has been reframed to take complete advantage of revolutionary iPhone’s Multi-Touch interface and accelerometer. The game offers three control schemes: Tap, tilt and slide. The game tests the platform capabilities with its motion sensing controls like tilt sensors.