Home General Kickass Torrents is back, but a little slow

Kickass Torrents (KAT) has been relaunched by a group of its original staffers, just months after it was taken down by the US government. The site is already facing some technical issues due to the enormous amount of traffic it’s been receiving. Additionally, there’s no guarantee it will not suffer the same fate as that of its predecessor.

But the current members of the crew claim they’re doing nothing illegal since it does not host any copyrighted content on its servers. The infamous torrent site now goes by the identity katcr.co/new and retains popular uploaders. The latter is definitely going to be a big draw for the thousands of users who have been missing their trusted uploaders.

The Kickass Torrents staffers have worked to ensure that the new website sticks to the design of the original platform as much as possible. This should keep it simple for returning users who’ve probably been depending on mirror sites or KAT wannabes for downloading content. The KAT crew tell TorrentFreak, “The majority of our original staff, admins, and moderation team joined us after Kat.cr went down.” 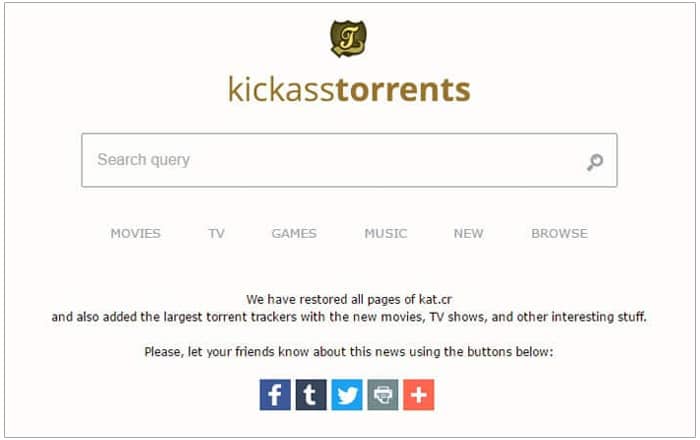 The relaunched website has apparently been built on a secure database. On a side note, Gizmodo has an brief summary of what not to do when you’re captaining a potentially illicit internet service. Torrents by themselves are not illegal. But the situation gets murky when sites like The Pirate Bay, Kickass Torrents and others enable users to share copyrighted content.

Also see: Visiting torrent sites could land you in jail, or not

Those who can’t access KAT right now will have to be patient since it’s straining to serve the sheer number of folks eager to check out the newly resurrected service.