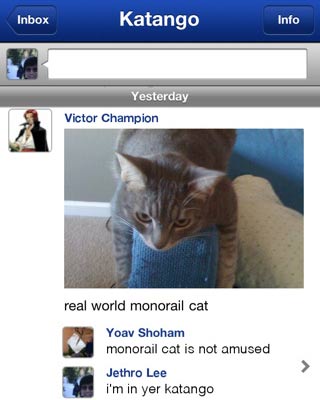 Katango, a social-sharing application focusing on algorithms made its debut on the iPhone. Its key feature is the ‘Personal Crowd Control’ which automatically arranges friends and family members into groups or categories.

According to developers of this app, they’ve constructed a complicated algorithmic solution to deal with the problem of untangling complex virtual lives of members of various social networking sites.

“If you look at the history of sorting through content on the web, Yahoo originally manually curated content, until it became too complex, and Google developed a system to index and sort using algorithms. What Google did for the Web, we’re aiming to do for social, using the right algorithm to sift through the massive explosion of real time people data so users don’t have to do it by hand,” explained Yoav Shoham, Co-Founder and Chairman of Katango.

The application extracts data from users’ social networks and immediately sorts friends into groups on the basis of proximity, interests and interconnectedness. Groups of family, close friends, sports teams, high school friends, work connections, etc. can be made by users. This app provides them with a way to share messages, photos and comments only with their dear ones. The whole process is automatic and doesn’t require any manual help from users.

Bing Gordon, Katango board member and partner at Kleiner Perkins Caufield & Byers said, “Social sharing is growing exponentially, with more platforms and more relationships, so automation is our only hope. The Katango team, with expertise in machine-learning and social product design, is the perfect group to attack such a big problem, and I’m stoked to work with them.”

After downloading this app, users merely have to connect to Facebook and their friends are sorted into respective groups automatically. The application also enables them to add iOS contacts to their groups if they want to keep up with people not on Facebook. Users can post content via the app and have it sent in the form of an email to those who aren’t members of networking sites or have it put up on Facebook for friends who don’t use the app. Thus this tool seems to be quite user friendly.

The Katango app for the iPhone can be downloaded for free from the App Store.