Karbonn ST72 is the name of a new tablet which has been launched by the Indian company with components that make it worthy of an asking amount as low as Rs 6248. Available for purchase now via Amazon and Snapdeal at different price points, this slate has nothing exciting to offer to its buyers.

It comes with a 7-inch display which reproduces its visuals with a resolution of 1024 x 600 pixels. The fact that the Karbonn ST72 runs the Android 4.4 KitKat might turn out to be its only saving grace, as none of its other features can be described as highlights by any means. 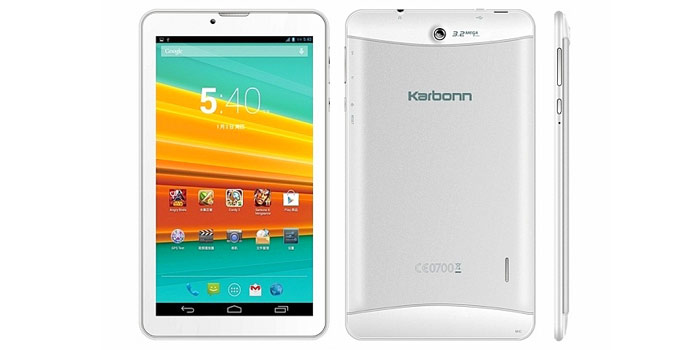 A 1.3GHz dual core processor toils at the heart of it, while a mere 512MB RAM module sits inside this Karbonn slate. There’s 4GB worth of hoarding capacity present on it, apart from a microSD card slot which can be used to expand the storage further up to 32GB.

Also Read: Karbonn Titanium S20 is a quad core KitKat phone out in India for Rs 4999

Prospective buyers are looking at a 2800mAh battery which can be fully charged within 3 hours. The photo and video department on the ST72 is taken care of by a 3.2MP rear camera, while selfies and video calling are handled by a front-facing VGA shooter.

Here’s a neat look at the specs of the Karbonn ST72:

The Karbonn ST72 can be bought now through Amazon and Snapdeal in exchange of Rs 6248 and Rs 6800, respectively.