The Karbonn Quattro L52, Titanium Mach 6 and VR Glasses have been launched, part of the brand’s inaugural effort to capture the growing virtual reality segment in India. Its strategy to do so is relatively straightforward and involves slapping an entry-level price tag on the two phones in order to appeal to the sub-Rs 10000 bracket.

As such, the Karbonn Quattro L52 is priced at Rs 8790 and the Titanium Mach 6 at Rs 7490. The VR Glasses will be shipped along with them. The headset has been constructed out of ABS plastic fiber and utilizes bi-convex lenses to grant a theater-like experience while consuming videos. 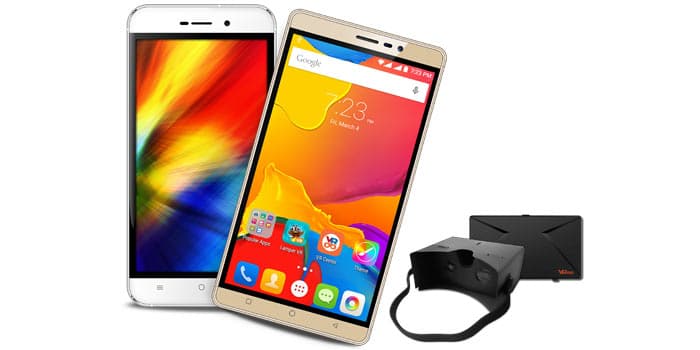 All a user has to do is place either Karbonn phone in the device holder. The brand has even provided for an in-built VR app to allow them to film their own VR recordings. The videos can be captured through the 8MP camera of the Quattro L52. It’s been equipped with a Sony sensor, an aperture of f/2.2 and LED flash.

A 5MP front-facing shooter takes care of selfies and video calls. On the surface, the Quattro L52 bears a 5.5-inch IPS HD screen which has been blessed with 2.5D curved glass. Under the covers, it packs 2GB of RAM and 16GB of ROM, expandable till 32GB.

There’s also a 1.3GHz quad-core processor of unknown origin ticking away at the 4G-ready Karbonn device’s center. The dual-SIM phone is additionally fueled by a 2250mAh battery that can apparently last for 300 hours of standby time and 6 hours of talk time.

The Karbonn Titanium Mach 6 has a lot in common in with the Quattro L52 in terms of specs. Notable differences include the former’s 6-inch 720p display, 3300mAh battery, 3.2MP selfie snapper and lack of 4G support.