We’ve seen Android smartphones sell at under Rs 4000, but the Karbonn A50s takes things even lower, the smartphone being an entry-level one and it has gone official in India. Flipkart is offering the handset exclusively in the country and has it tagged at Rs 2790.

This makes the Karbonn A50s more affordable than the Andi 2G Velvet and 3G Gem from iBall, and cheaper than Nokia’s 225 feature phone. It may be the most affordable smartphone on the market for now, but cheaper phones are inbound from Spice and Intex running on Mozilla’s Firefox OS. These handsets are expected to retail for less than Rs 2000. Coming back to the device in question, there’s nothing much to boast about, except for it being an alluring pick for first-time smartphone buyers. 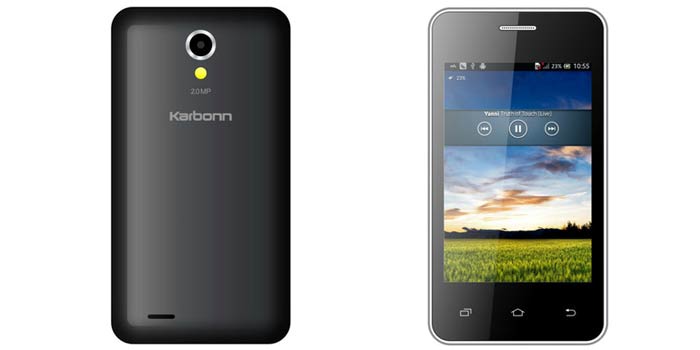 The A50s handset offers a 3.5-inch HVGA TFT LCD panel and dual cameras which you normally don’t see on low-price phones. The rear snapper is 2MP, while a VGA lens is fitted on the front. On the inside, there’s a 1.2GHz dual core processor from MediaTek powering up the phone accompanied by an 1100mAh battery. Dual SIM slots are present as well, one supporting microSIMs and the other, mini (normal) SIMs. Other features of the handset include 2G connectivity, 512MB of internal storage, a microSD card slot and 256MB of RAM.

Roundup of the Karbonn A50s specs:

As mentioned above, the Karbonn A50s is available exclusively through Flipkart and it can be purchased through this link.