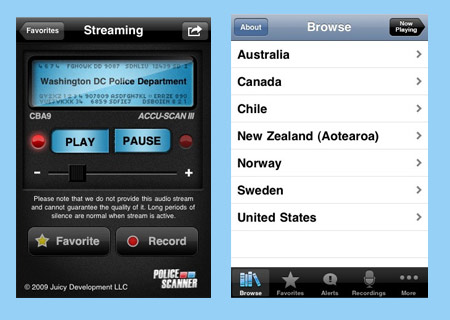 Avid listeners of crime-based news may find this iPhone app to be quite handy. iPhone developer Juicy Development rolls out the first interactive police scanner app, named Police Scanner 2 for the iPhone this week at Mac World 2010 in San Francisco.

This app enables users to warn others about emergency broadcast streams as they take place by means of text messages. These text messages materialize on a tiny ticker in the app, thereby facilitating users to tune in to the stream being talked about.

“We found that there were a community of users that wanted to let each other know about exciting feeds being broadcast. And this feature allows everyone to share information as it happens,” commented, David Kyle, project manager.

The app encompasses the facility for users to listen to police, fire, and EMS activities worldwide. Contrary to other emergency scanner applications, this app’s adaptive technology enables updates to data streams to mail ‘live’ in just a few hours of changes made. As emergency data streams can alter so swiftly, Police Scanner can deliver the updated information to its users without waiting for slow version modifications rolled out in the iTunes store.

Moreover, the Police Scanner 2 lets users to tape bits of a stream and play it back later. The duration of snippets recorded is restricted only by the memory of the iPhone or other device. With more than 2300 national and global EMS streams, the app seems to provide the biggest collection of police, fire, and emergency services streams accessible for the iPhone in one application.

Users can trace and pay attention to police dispatch frequencies all over the world. Police Scanner 2 is claimed to be the only iPhone emergency scanner application to offer streams from nine countries. Apparently, new streams are included everyday.

Police Scanner can operate on wireless LANs, the 3G network, or on the Edge network, and is attuned with both 2.x and 3.0 devices. From the Apple App Store, users can purchase the app for $4.99.