Reliance Jio had everyone on tenterhooks regarding its Jio Prime scheme, with several people wondering what would happen once the 31 March 2018 deadline for the service passed. As it turns out, there was nothing to worry about since the company has decided to extend the deal for another 12 months.

This means that existing subscribers can continue being Jio Prime members at no additional cost. This is a limited period offer though, and Reliance Jio isn’t stating when exactly the scheme will end. To take advantage of it, people will have to open up the MyJio app.

There should be a banner at the top which congratulates them and tells them about their subscription getting extended for another for free. To move ahead, individuals will have to tap on the “Get now” button and then check if their number is accurate on the next page which opens up. 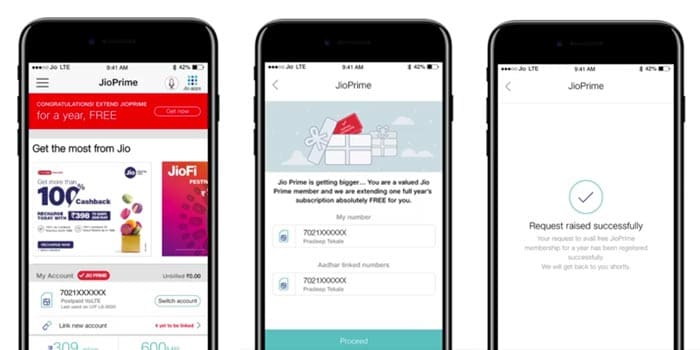 Tapping on Proceed will open up a new page which tells them that their request was raised successfully and Reliance will get back to them shortly. It’s not clear why the company isn’t straightaway signing people up for another year, but following these steps should be enough to enjoy being a Jio Prime member for another year.

As for anyone who doesn’t sign up for Jio Prime until after April 1, they’ll have to pay the standard Rs 99 fee. The service is the key to unlocking a majority of the brand’s offers, as many of its cashback deals and cheaper packs are only for Prime members.