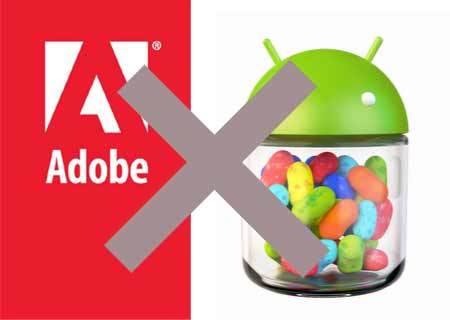 Coming as rather bad news for Android fans, the Jelly Bean OS will not support Adobe Flash player. From August 15 onwards, the utility will not be downloadable even via Google Play, possibly taking away a bit of the zing from Android 4.1.

Till now, even those with Adobe-uncertified devices have been able to download the Flash Player application from the Google Play store. However, Jelly Bean users be not able to do it as the ‘best possible experience’ is attainable only on licensed Flash Player implementations and it won’t be the case here, says the company.

Compatible devices that do not have Flash Player installed on them before the August 15 deadline will not be able to download the app via Google Play thereafter. This will mean that Flash-based content covering games and clips could be no longer accessible from Android mobile browsers.

Importantly, Adobe has urged people to download the Flash Player app from the store before the given time limit or use certified devices. Those planning an upgrade to Android 4.1 will not receive the application at all. Moreover, those who update to Android 4.1 are advised to uninstall the utility, considering that Flash Player may lead to technical issues on their handsets.

Like we’ve already mentioned, Adobe Flash Player will not work for Jelly Bean and it won’t be downloadable from Google Play from August 15 onwards.