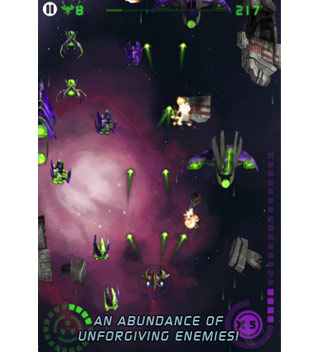 Star Cannon is a classic arcade-style shooter that shoots in just after the success of Bouncedown. Its first game, Bouncedown, has managed to gain more than four million downloads. Star Cannon claims to offer entertaining, compelling gameplay along with high quality graphics which players can expect from all games offered by Jagex.

“At Jagex we are always looking for new ways to offer our games to the widest possible audience and Star Cannon is the first of a handful of titles we will release this year for the iPhone and iPod Touch,” said Rob Smith, Jagex’s Chief Operating Officer. “We were incredibly happy with the great community feedback from BounceDown, our first iPhone game, we have incorporated this into Star Cannon by building on what makes the original PC version of the game so compelling and adding a host of new features and gameplay specific to the iPhone version.”

In this new game, players command a space vessel to combat an alien army force. This vessel is said to be highly armed. Star Cannon for iPhone is now available at the Apple App Store.

Jagex has made available the Star Cannon at an introductory discounted price of £0.59 GBP for a limited time. Jagex is also said to release multiple titles for the iPhone and iPod Touch throughout the year.