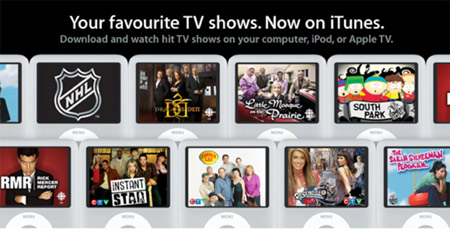 Canadian iPhone users can now enjoy their favorite programs such as the top-rated, award-winning ‘Corner Gas’ from CTV, smash hit comedy ‘Little Mosque on the Prairie’ from CBC, Emmy and Peabody Award-wining ‘South Park’ from Comedy Central and the NHL Games of the year which can now be purchased from iTunes stores in Canada.

The Apple iPhone also offer television shows which can be purchased as well as downloaded from the iTunes Store.

DVD picture quality is offered on downloading with a resolution of 640 x 480 (up to 480, depending on the aspect ratio) which can be viewed on PC and Mac, iPod nano with video, fifth generation iPod, iPod classic and on a wide screen TV with Apple TV Television programming in the iTune store of Canada.

Eddy Cue, Apple’s vice president of iTunes stated, “We’re thrilled to bring television programming to the iTunes Store in Canada in time for the holiday season.”

He further added, “We’re off to a great start with hit shows from CBC, CTV, Comedy Central and MTV Networks, along with the best of classic and current NHL action.”

The other TV channels offered by the iTunes in Canada include:

The cost per episode of the favorite program from the iTunes store in Canada is CAN$1.99