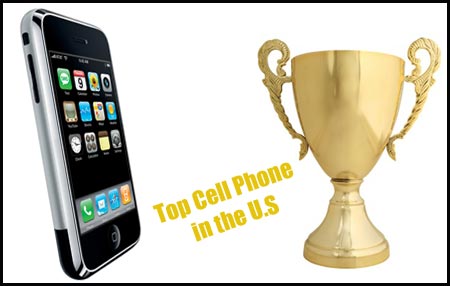 The Phone may have been the most talked-about phone and the phone enjoys a lot of fan-following. Now Apple’s prized possession – iPhone is proud to be one of the Top phones in the U.S as the iPhone 3G even beats the records of the Motorola RAZR.

As per the report from the NPD Group, the iPhone was proud to place itself in the top position in handset sales to U.S. adult consumers during the third quarter. As the iPhone enjoyed this position, it was obvious for Motorola RAZR to shift to the second position in the same quarter and the list follows on with Research In Motion’s Blackberry Curve (all models), the LG Rumor and the LG enV2.

The RAZR has enjoyed the position of the top-selling consumer handset for 12 consecutive quarters, which is indeed impressive. Now its turn for the touch-screen phone to enjoy this position as it entertains its customers with a variety of features and a list of applications.

The report also noticed that QWERTY keyboard phones received a tremendous amount of response with a rise of 30% of all handsets sold in the third quarter, which is indeed impressive as it was 11% a year ago. NPD’s report is based on more than 150,000 online consumer research surveys completed each month.