Stop reading this already if you’re the proud owner of a brand new Apple iPhone 6 smartphone and haven’t heard of #crescentgate yet. Say it’s nitpicking or whatever else you must, but some folks have started noticing a freshly discovered design flaw on their iOS device.

Word is that the camera crowning the front of the iPhone 6 tends to slide to one side instead of staying put in its housing. The edge of the lens is thus exposed, causing a crescent shape to show up beside it. Whacking the smartphone on the side may not really solve the problem though. 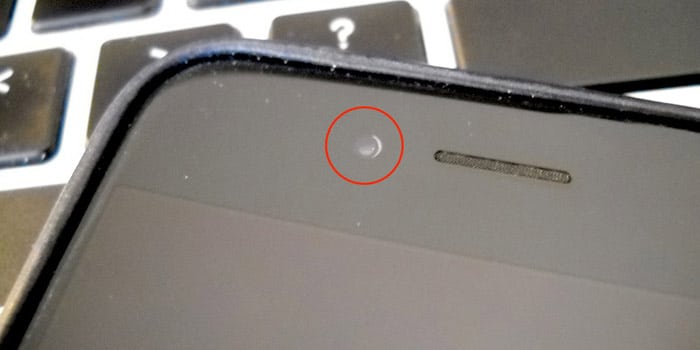 Various reports assert that the misaligned front-facing camera cannot be coaxed back into place once it shifts from its proper position. It’s not just the iPhone 6, but also its bigger sibling which are apparently facing the issue. It’s not clear whether devices from particular batches are faulty, or if all of them are affected.

This is not the first ‘iPhone 6 design fail’ issue to have cropped up since the handset’s release. Before this we had #bendgate which saw several users complaining about the device being prone to bending. Before you ask us, it’s not part of the consumer experience Apple intended for you to go through.

Also see: iPhone 6 and iPhone 6 Plus lead to iPad neglect among buyers

Then there was that shady #hairgate controversy accusing the gap between the iPhone’s screen and its bezel, of occasionally snagging a hair and ripping it out by the follicle. Obviously, fans as well as haters grouped together are an excitable lot when it comes to quirky stories about Apple and its products.

So while there is photographic evidence from The Mac Observer to back the latest #crescentgate story, the problem of the shifting camera cannot be widespread enough to have a catastrophic effect on the sales of the Apple iPhone 6.