Trust an iPhone 6 review video to show up on YouTube before it even gets the official launch treatment by Apple on September 9. We have a confession to make, we saw it in spite of telling ourselves it couldn’t be the real thing and if you scroll down a little bit, you can have a gander at it too.

Unless someone managed to make another one in the time we’ve taken to write this post, the one we’ve attached below is the only review video of what is purportedly the iPhone 6. You’ll probably agree with us when we say it seems pretty convincing, barring the fact that we don’t know Mandarin and had to read the transcript published on 9to5Mac in order to understand what was being noted by the presenter.

Apple Passbook which is designed to hold virtual copies of a user’s airline boarding passes, cinema tickets, loyalty points, coupons and other forms of mobile payment, appears to have been overhauled. The icon for the app that previously showed 3 horizontal stripes, now has an extra one right on top in the color red. This is apparently supposed to stand in for a credit card.

While rumors concerning the next generation iPhone are being pelted towards fans at a relentless pace, the latest we reported had to do with China Telecom. The service provider was caught with a pre-order page up. The site in question appeared to show side views of the Apple device in three color options of white, gray and gold. It also revealed some details on the specs, though history hopes you’ll take the leak with a pinch of salt. 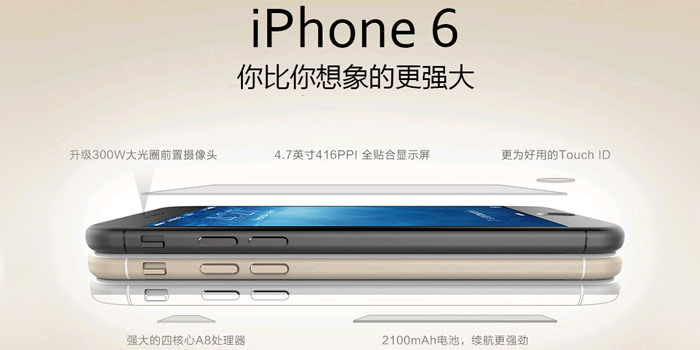 As for prices, the 16GB iPhone 6 in 4.7-inch and 5.5-inch versions are anticipated to sell for 5288 yuan and 6288 yuan, respectively in China. Based on our calculations with added taxes and what not, we think the former will cost Rs 58000, while the latter will be pegged at Rs 68000 in India. As for YouTube videos of the handset, you’ll find more like the one below, if you look around carefully.