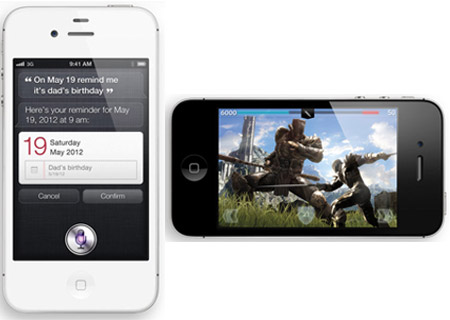 Unveiled last month and already gaining popularity the world over is the Apple iPhone 4S that is scheduled to hit the markets of South Korea, Hong Kong and 13 other countries on November 11. Residents of these nations vying to buy the next generation iPhone can register pre-orders for the same from November 4 onwards.

The latest Apple smartphone will be setting foot in Albania, Armenia, Bulgaria, El Salvador, Greece, Guatemala, Malta, Montenegro, New Zealand, Panama, Poland, Portugal and Romania besides South Korea and Hong Kong on November 11. It is currently available in 29 nations worldwide and is scheduled to arrive in more than 70 countries by the end of this year.

The iPhone 4S comes equipped with a 3.5-inch 960 x 640p widescreen multi-touch Retina display offering a contrast ratio of 800:1. It possesses an 8MP camera with autofocus, face detection, LED flash and a f/2.4 aperture. One of the most interesting features of this device that sets it apart from its predecessor is Siri. The Siri technology works as a personal assistant to users and helps them in executing regular tasks by speaking to the phone. Users can issue commands by directly talking to the handset in a natural conversational style and expect replies in return.

The iPhone 4S is available in three capacities of 16GB, 32GB and 64GB which are priced at $199, $299 and $399, respectively. It comes in shades of black and white. Set to retail from November 11 in the listed countries, the smartphone will however not be available for pre-orders in Albania, El Salvador, Guatemala, Malta, Montenegro and Panama.