Flipkart has started selling the Intel Compute Stick with Windows 8.1 in India for Rs 9999. The smugly small device claims to be capable of turning the user’s TV or monitor into a fully functioning computer. All it needs is an HDMI port in order to connect to the screen in question.

If you recall, even iBall entered the PC-on-a-stick segment with its Splendo device only last month and it is priced lower at Rs 8999. The Intel Compute Stick offers a mini PC user experience via the Microsoft Windows 8.1 OS. The company has also released another version of it that operates on Linux. But Flipkart doesn’t seem to have it up for sale at present, probably because it doesn’t see a market for Ubuntu in India. 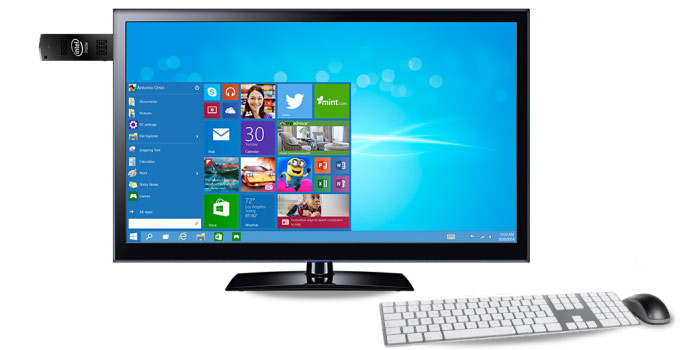 The Compute Stick is powered by a 1.8GHz Intel Atom Z3735F quad core processor. It is pre-loaded with 32-bit Windows 8.1 with Bing. There’s 2GB RAM aboard and 32GB memory space. The Linux version is pre-installed with 64-bit Ubuntu 14.04 and has half the storage at 8GB and only 1GB RAM. This PC-on-a-stick features a USB 2.0 port and supports Wi-Fi 802.11bgn as well as Bluetooth 4.0 connectivity.

The lack of hoarding space in the device which has Intel Virtualization Technology, is compensated for by the addition of a microSD card slot for upping the memory. It integrates Intel HD Graphics and sports dimensions of 103 x 37 x 12 millimeters. Users should be able to run games, basic editing software, presentations, videos and more on their Compute Stick and TV or monitor setup.

As we’ve already mentioned above, the Intel Compute Stick is only available with the Windows 8.1 OS right now. There’s no word on whether its Linux variant will hit Flipkart in the future.