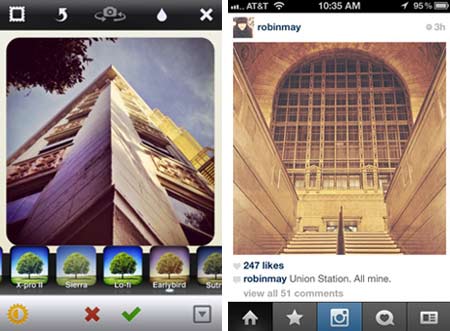 For all those who have been waiting to see an official Instagram Android app, this dream might come true in the near future. It was announced at the ongoing SXSW, that the iOS app will soon see an Android version.

Instagram is a photo filtering application which is currently available only for iOS devices like the iPad and iPhone. Recently, the company also declared that it now boasts of about 27 million downloads, conveys a report from Mashable. The software is loaded with numerous effects and settings which can be used transform images in a fresh, artistic manner. This includes filters like Rise, Amaro, Hudson, Lo-fi, Sutro, Toaster, Brannan, Inkwell, Walden, Hefe, Nashville, 1977, along with several others.

“In some ways, it’s better than our iOS app. It’s crazy. I don’t think it took us so long. We just had priorities. Had we tried to be both on Android and iPhone at the same time, it would’ve been tough to innovate in the way that we have,” said Kevin Systrom, co-founder, Instagram about the upcoming Android app, after his presentation at the SXSW this year.

Furthermore, it was also confirmed that the software in question is currently in private beta testing phases and should be unveiled very soon. Although the new edition was teased on this occasion, enthusiastic fans didn’t get to see a demo. News about this app originally started making the rounds after Systrom revealed about it in December 2011 at LeWeb which was took place in the city of Paris.

The Instagram Android app release date is not known yet.