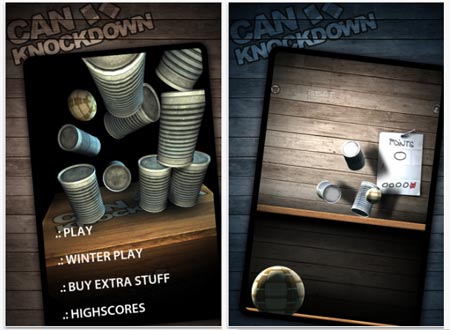 Can Knockdown fanatics who simply loved blowing down pyramids of cans just for the sake of fun have a new reason to be excited. Infinite Dreams has announced that it will release a new version of Can Knockdown on March 1 for iPhone, iPad and iPod touch users.

The updated version of Can Knockdown is expected to integrate the much-awaited Game Center Achievements feature. While playing this game, users need to accurately aim at and knock down piles and pyramids of cans. With its explosive gameplay and realistic physics engine, the title is touted to provide a heightened gaming experience.

This game boasts of an eye-catching graphics display and it also comes equipped with high-resolution Retina display support. Users can brag about their scores online via Game Center leaderboards. Infinite Dreams is even gearing up for the official launch of Can Knockdown 2 which will hit the App Store soon.

The updated Can Knockdown game can be downloaded from the iTunes App Store free of cost.