It’s official, Indians are thoroughly addicted to their smartphones according to an Expedia survey which notes that travelers from this country prefer using apps in order to make reservations. Expedia is an Internet-based travel firm headquartered in Washington, with localized websites for around 30 nations across the globe.

Out of the total number of survey respondents, a whopping 95 percent claimed to be extremely dependent on their devices. It revealed that Indians take the top spot when it comes to data roaming plans and app booking. Approximately 68 percent of folks from this country admitted to have subscribed to a roaming or international data plan when traveling out of bounds, with regards to their regular service provider’s network. 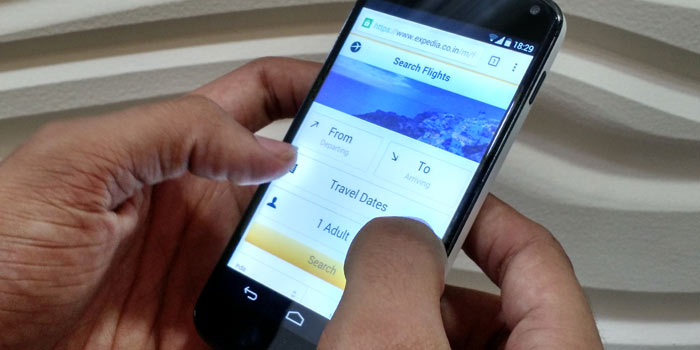 Almost 75 percent of Indians (highest as compared to other regions worldwide) apparently make hotel reservations from a smartphone or tablet, while only 28 percent use their desktops for travel booking in general. Expedia Asia’s Managing Director, Vikram Malhi, explained that the concerned questionnaire was designed to grab some insights into the booking behavior of today’s traveler.

The online study was conducted by the Northstar consulting firm for Expedia, says Hindustan Times. It’s crucial for companies to understand how customers interact with their services in a tech-savvy world so that they can fine-tune their marketing and advertising efforts. Take for instance, online shopping sites which have partnered with crucial apps like Truecaller to sponsor users who wish to try out its Premium deal for free.

Also see: 82% Indians reported to be anxious about missing out when not online

Two ways of checking out the virtual phone directory’s paid service for a day, require users to watch an ad or complete an offer involving downloading an app onto their device, in exchange for a Premium Badge. Businesses based on e-commerce have few better methods to tempt buyers than to bombard them with deals once they’ve chosen to install the application. It’s like inviting a vampire into your house, truth be told.

The Expedia survey did not just cover Indians, but included people from Europe, North America, South America and the rest of the Asia Pacific region. It was carried out online between August 25 and September 17.