Indian-American teen Karan Jerath, has won a Young Scientist Award at 2015’s Intel International Science and Engineering Fair for inventing a device which shuts down underwater oil spills quickly. The 18-year old’s system which is supposed to weigh 350 tons, comes fitted with sensors for measuring the pressure, temperature and density of the gases and fluids spewing from a well on the seabed.

A computer connected to the device would then tell the device how its inbuilt valves must be adjusted so that the oil and natural gas may be collected. It functions as a containment enclosure for separating the sea water, spilled gas and oil, and is capable of stopping methane hydrate which is a potential clogging agent, from being formed. The system will help reduce cleanup costs and prevent ecological disasters. 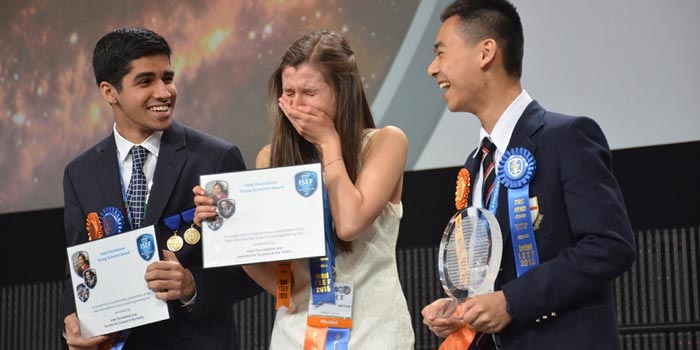 Also among the top winners at the IISEF were 16-year old Nicole Ticea who earned a $50000 reward and 17-year old Raymond Wang who won a $75000 prize. Ticea proudly presented a disposable, diagnostic tool which does not need electricity to work. It can detect early signs of HIV infections and deliver test results within an hour. It may be possible to manufacture the device within $5 and should be useful in low-income communities.

Airplane ventilation systems are generally designed in a manner which forces the flow of air to move around the cabin at nose level. Wang’s invention is a low-cost deflector that redirects the air downward. So germs from sneezes or coughs are swept towards the floor, reducing the chances of airborne infections spreading easily among passengers. It also triples the amount of fresh air available to travelers within the aircraft cabin.

As for Jerath’s device for shutting down undersea oil spills in a jiffy, it is promising because it can operate at various depths underwater, accommodate different pipe sizes and handle all kinds of fluid compositions. The teenager won a prize of $50000 at the IISEF for creating the containment system.