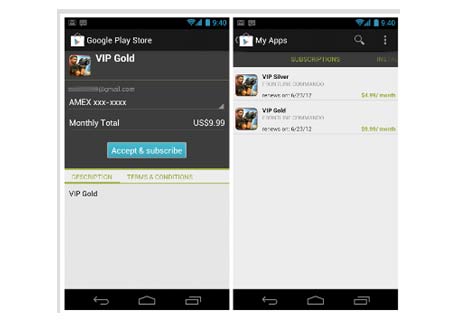 Arriving as good news to developers, Google Play now supports subscriptions along with the existing in-app billing procedures. The developer community can now sell its apps in the form of yearly or monthly subscriptions.

As the time frame for the subscription ends, the concerned apps are renewed automatically. Developers just need to decide the cost and billing time period for every Android app or product, while the entire monetization process is handled by Google Play. Coming to users, the experience should be very similar to that of in-app billing, but for the subscription information related to the price and time periods of the respective apps. After the initial process is over, Google Play keeps track of the periodic expenses. It updates users regarding extra charges and renewal fees via mails. 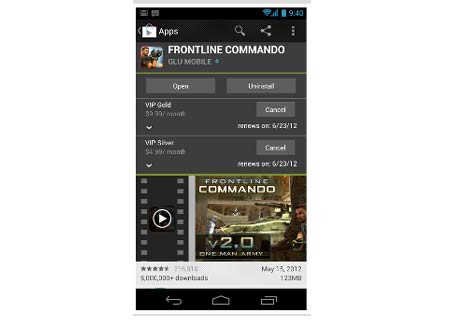 “If you’re a developer, you can get started with subscriptions right away by reading the In-app Billing documentation and downloading the updated sample app. If you are already using in-app billing, you’ll find that adding support for subscriptions is straightforward and involves only minor changes to your code,” states a post on the official Android Developers blog. .

At any given moment, users can keep a check on their subscriptions and cancel them as required via My Apps in the Play Store app. This utility allows developers to sell not only magazines or journals, but other products covering gaming levels, musical or video content and so on. Apart from these offerings, the service utilizes a publisher API based on the HTTP protocol that enables enterprise-scale backend servers to assess and discard subscriptions.