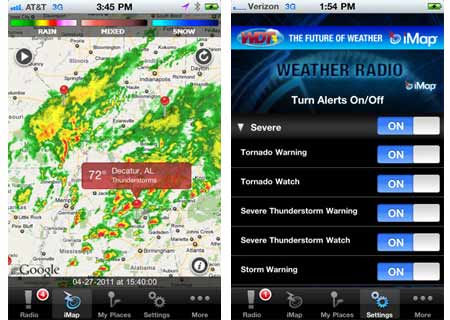 Close on the heels of the recent earthquake and tsunami that rocked Japan comes a new software offering which enables users to safely avert nature’s catastrophic wrath. In its considerate attempt, Weather Decision Technologies recently released its latest iMapWeather Radio app for Apple’s iPhone 4 as well as iPad and iPod touch.

This warning system touts to provide users with accurate alerts on perilous weather conditions ranging from floods, hurricanes and tornadoes, if their devices fall inside a watch polygon. It instantaneously delivers audio alerts in the form of loud beeps followed by a comprehensive description of the alert type. Furthermore, people can also stream real-time footage of severe weather coverage.

“Think of the iMapWeather Radio app as a highly advanced weather radio right on your mobile device – a key tool to being prepared for dangerous weather,” elucidates Mike Eilts, President and CEO of WDT. “With iMapWeather Radio, users receive precise location-based alerts of severe weather coming their way, acting as an early warning to help individuals and families seek safety. And, because the app is available on 3G capable devices like the iPhone and iPad, users still receive vital information when the power goes out and TV and radios can’t be turned on.”

The app presents more advanced features, such as the ability to ‘wake up’ users in case of severe weather conditions for allowing them to seek safety in time. To ensure the wellbeing of close family and friends, it can be set to pinpoint which five different locations to follow. This weather app is crafted to efficiently conserve handsets’ battery life, even while employing GPS.

The iMapWeather Radio app can be purchased by shelling out $9.99 from the iTunes App Store. It is also slated for release on Android platform sometime later this year.