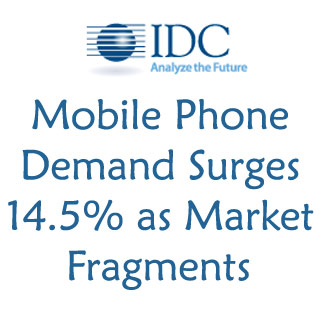 The mobile world is endowed with interesting phones virtually every other day. As per the IDC Worldwide Quarterly Mobile Phone Tracker, a total of 317.5 million handsets had been shipped in Q2 2010 which is up by 14.5 percent from the 277.2 million units offered in the second quarter of 2009. The report also highlights that in the first half of 2010, 620.6 million units itself had been shipped. This figure has increased by 18.5 percent from the 523.5 million handsets shipped in the first half of 2009.

The research studied the market in Q2 of 2010 and came out with the some interesting facts. According to the Regional Developments segment, the Asia Pacific region excluding Japan had more low-cost devices which were usually produced and manufactured from China but were branded locally. These phones had a major impact on markets like India, Indonesia and Vietnam.

As far as smartphones are concerned, outpacing the overall market, the demand for these handsets were claimed to be higher in the Korean market and international brands alike. In Japan the shipments of traditional mobile phones and smartphones are known to be low because of the absence of operator subsidies although this flaw has not kept manufacturers away from introducing new features like digital television and radio.

For the EMEA region, the research revealed that the demand for smartphones rose in the Western European market because of sales, price cuts to models, new product introductions and generous operator subsidies. It also claims that vendors specifically offering Android smartphones fared substantially well by increasing the sales. The market of traditional and feature phones is known to have gone down in the Asian manufacturers’ region.

The CEMA handset market is claimed to have been consistent in its growth supported by mobile subscribers in the Middle East and Africa. The smartphone market had eventually increased in this region after the retrenchment of 2009 financial crisis which were supported by the cost attached to Nokia models being dipped and the introduction of low rated smartphone models. It also said that in the traditional mobile phone category, Nokia faced severe competition from Samsung as it took share in the entry level models.

Ramon Llamas, senior research analyst with IDC’s Mobile Devices Technology and Trends team, stated, “That worldwide growth was driven primarily by vendors outside the top vendors is particularly noteworthy. Directly contributing to this is growth in the smartphone category. Companies with a strict focus on the smartphone market, like RIM, Apple, and HTC have clearly benefited from steadily increasing user interest. But it’s not just smartphone vendors that have driven the market forward – it’s also the companies with a presence among entry-level handsets and mid-range devices, which have long been the domain of the worldwide leaders.”

The smartphone market in the North American region is claimed to have taken the centre stage with the introduction of Apple’s iPhone 4, HTC Droid Incredible and the EVO 4G. Samsung Galaxy S, Motorola’s Droid X and more from Dell are claiming to be introduced later in this year. A growth in smartphones was witnessed in Canada where phones like Sony Ericsson’s Xperia X10 and Motorola’s Quench, DEXT, and BackFlip arrived on the market. The demand for traditional phones is said to have increased as well with new wireless carrier entrants and discount brands.

The report further claims that in the Latin America region, the never ending demand for smartphones was increasing due to the combination of growing user interest, low-priced data plans and availability for prepaid services. More companies entered into this region like Apple, HTC and RIM while others marked a significant presence in the market. Additional handsets are expected to be launched in the second part of this year which will eventually create more competition in the market.

Kevin Restivo a senior research analyst with IDC said that the traditional mobile phone makers and brand owners ZTE have also grown. This is mainly because they offer high end phones at lower costs and are popular amongst wireless service providers.

As per the report, the top 5 mobile phone companies in the Q2 2010 are Nokia, Samsung, LG Electronics, RIM and Sony Ericsson. Reportedly Samsung witnessed growth in the United States and the emerging markets while the overall demand for smartphones also claims to have increased in Europe.