Home Games Ice Road Truckers introduced on the iPhone and the iPod Touch by... 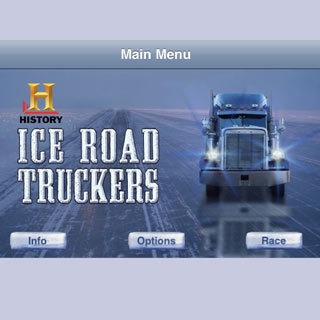 Ice Road Trucker, a smash hit on History is now designed as an app for the iPhone and the iPod touch devices. The app facilitates users to control gigantic 18-wheelers through the icy roads of Arctic, carrying their load to the finishing line before time limit.

The paid version of the game provides more game options to players. Moreover gamers can select different routes, trucks, loads and more. The game is full of powerful trucks on the globe and includes frozen roads from Inuvik to Tuktoyaktuk. The target is to remain on the road, overcome all the hindrances and reach the ultimate destination before the finish time.

“Ice Road Truckers has developed a very loyal fan-base worldwide, and viewers are keen to engage with the series in any way they can. This Ice Road Truckers game app is the perfect way for fans to interact with the program. It’s a great promotional tool for the series and another opportunity for us to attract new viewers,” quoted Kate Winn, Vice President, Home Entertainment, A&E Television Networks.

In case some time is left, gamers win extra money. However if time runs out they would not be permitted to reach the next level. The game features customization options along with driving that should help players. Also a time trial mode is expected to be released soon. Ice Road Truckers is broadcasted globally on History in the UK, Spain and Portugal, Germany, Israel, Scandinavia, the Benelux, Central Europe, Greece, Turkey, Africa, Latin America, Japan, and South East Asia.

The new season of this show discovers Alaska and records the incredible challenges and history of this fascinating region. Ice Road legends Hugh ‘Polar Bear’ Rowland and Alex Debogorski come back and are joined by their associates at Carlile Transportation George Spears. The ‘King of the Haul Road’, courageous Jack Jesse ice road rookie Tim Freeman and Lisa Kelly, the foremost permanent female driver feature in the series.

The paid edition of the app would be unveiled on June 28, 2009 and is priced at $3.99. Presently, the ‘Lite’ version is available for free in Apple stores globally.