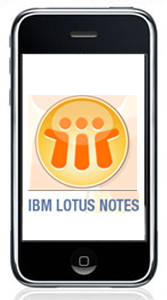 We have reported about iPhones being launched across the globe. IBM has joined hands with Microsoft to bring this software. Now there is news about new software for iPhones. IBM is offering its email software Lotus Notes for iPhones and iPod Touch.

IBM has announced the Lotus Notes e-mail package for Apple’s portable devices. This software requires use of IBM’s Domino e-mail server program. This will be free for the users who have Lotus Web access license already.

IBM has plans to release Lotus Notes and the free Lotus Symphony productivity package. This package includes documents, spreadsheets and other Microsoft Office like software for Apple’s Macintosh computers.

The cost starts at $39 per year for the new users. The iPhone users can connect to Web-based e-mail services and to corporate e-mail sent over Microsoft’s Exchange e-mail platform.

Now, Apple hardware has become a broader platform after the launch of Apple iPhone and Web-enabled iPod Touch devices. Apple has delayed its devices to third-party applications; a “software developers’ kit” to enable that isn’t due until next month.