Home Apple Hyperdrive iFlashDrive for iPhone to arrive in the U.S and U.K. 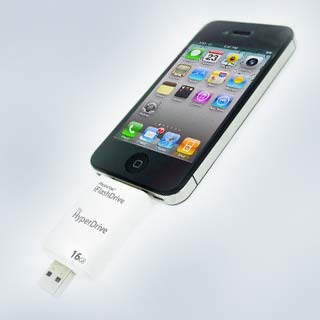 Sanho has collaborated with PhotoFast to develop the Hyperdrive iFlashDrive, a new two way sharing device for transferring content between the iPhone and PC or Mac which will be made available in the U.S and the U.K. This flash drive can also be used with the iPad as well as the iPod.

The device serves two purposes with respect to handheld Apple devices. It is a portable gadget which stores data from these devices and also enables an easy way of content transfer between the iPhone and the PC. The drive is available in varying memory capacities of 8GB, 16GB and 32GB.

“HyperDrive iFlashDrive is the easiest solution to transfer and share files between different iDevices and computers. iFlashDrive does not require iTunes, Internet or wireless networks to transfer data which makes it perfect for quick instant transfers between different iDevices, when computers or networks are not present like on airplanes, basements or out of signal areas,” explains Daniel Chin, President of Sanho Corporation, about the working of this new device.

On one end, the drive is equipped with a USB connector to allow easy connectivity with PC or Mac. On the other side, it is fitted with a 30-pin dock connector approved by Apple, which ensures hassle-free synchronization with the iPhone.