The much anticipated Huawei Ascend P8 smartphone is all set to make its debut according to various recent rumors and leaks, and it seems April 15 will be the date on which it will be unveiled. An event that will take place in London has been announced by the Chinese company, thus igniting the excitement regarding the new handset.

As you can see in the space below, the invitation card itself doesn’t give away any details regarding what will be showcased at the April 15 press conference. However, the Huawei Ascend P8 is being heavily teased by the company in China over the past few weeks. 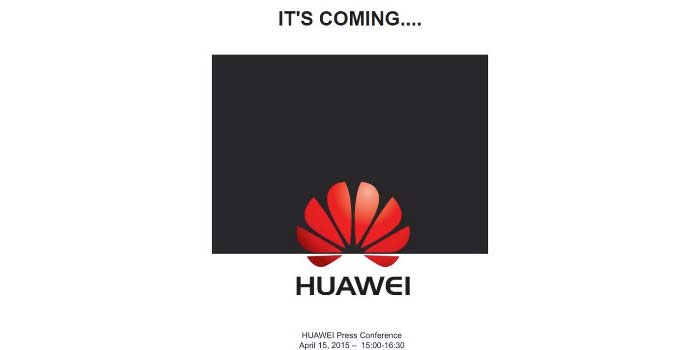 Details about it have been heard about in leaks as well, which have told us that a 5.2-inch 1080p full HD monitor will form part of its offerings. Moreover, it’s also being said that the Ascend P8 will bear a unibody design, and ship with two 13MP cameras.

Also Read: Huawei Honor 6 Plus goes on sale in India from March 24

It will apparently bear 3GB of RAM that will be paired with Huawei’s very own octa-core Kirin 930 processor. It’s a no-brainer that Android 5.0 Lollipop will be its chosen OS, and that the company will be garnishing it with its proprietary Emotion UI.

Here’s a clearer look at all the leaked specs of the Huawei Ascend P8:

In other news about the company, it is expected to be one of the partners for Google’s Nexus program this year, which means there are chances of us getting to see a Huawei-made Nexus product soon. But for now, fans should stay tuned until April 15 to know more about the Huawei Ascend P8 smartphone.