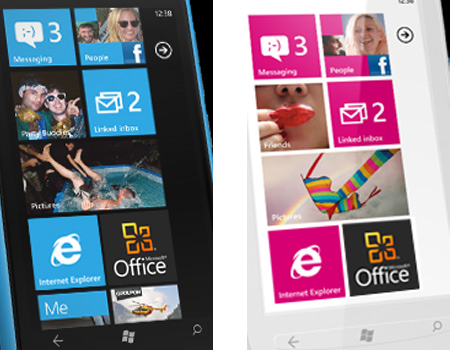 The Windows Phone 7 OS seems to be gaining popularity around tech terrain as rumors have been rife that two smartphones namely, the HTC Radiant and Samsung Mandel, powered by the platform are set to make their debut in the near future. According to speculation, these handsets will come loaded with a revised and more advanced version of the Windows Phone 7 Mango OS which is capable of lending support to 4G LTE networks.

As per the information that The Verge has stumbled upon, Radiant and Mandel are just codenames kept for convenience and may not actually be their final titles. The Samsung handset will reportedly boast of a bigger screen, even larger than the 4.3-inch one on the Samsung Focus S.

The HTC Radiant should be a familiar name with those who keep track of the latest buzz in tech world as the rumor mills had claimed that it was to arrive incorporated with Microsoft’s forthcoming Windows Phone 7 Tango update. But now, it is being said that they would be powered by a refreshed variant of the Mango OS. Talking of the Windows Phone 7 platform, the Nokia Lumia 710 and 800 which are the first handsets from the Finnish company’s stable to operate on the OS, were recently launched.

These tidbits are all only speculations as nothing about the HTC Radiant and Samsung Mandel release date and price details are known. However, these handsets are apparently most likely to be launched along with a Nokia 4G Windows Phone by the first quarter of 2012.