Home HTC HTC One mini to go gold as well?

The HTC One mini has been out in the open for quite some time now, and it’s about time some third-party jeweler drenched in it gold and slapped a high price tag against it. This phone has been spotted in the form of leaked images, and judging by the fact that the HTC One too was picked up by Goldgenie and given the same treatment, we’re guessing it’s the same company behind this device too.

GSMArena has received images of the gold-plated HTC One mini through some anonymous tipster who hasn’t quite revealed what price it will bear. It can be noted that HTC’s flagship device is being offered in its gold form by Goldgenie at £1579, hence the value of its smaller version can also be expected to hover around the same amount. 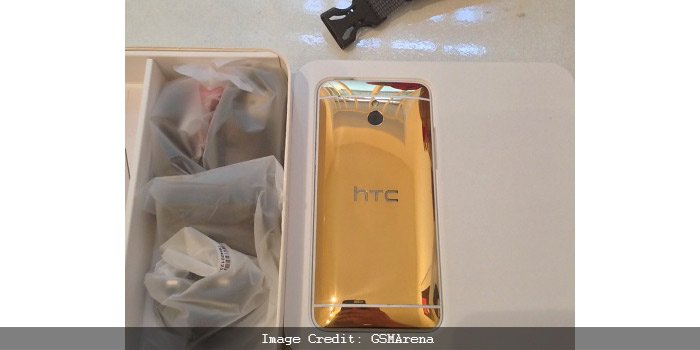 Available now in the US, the UK and other regions, the HTC One mini features the Sense 5 user interface which has been layered over its Android 4.2.2 OS. The phone runs on a Qualcomm Snapdragon 400 dual core processor which has been clocked at 1.4GHz. Giving company to this setup under its hood is 1GB worth of DDR2 RAM.

The device’s display is 4.3 inches in size, and is occupied by a 132mm x 63.2mm x 9.25mm body. This 720p panel is capable of delivering a pixel density of 341ppi. The HTC UltraPixel camera forms one of its main highlights, apart from a 1.6MP front snapper, an 1800mAh battery, HTC BoomSound and more.

We’ll have more on the gold HTC One mini when additional details about the device are out.