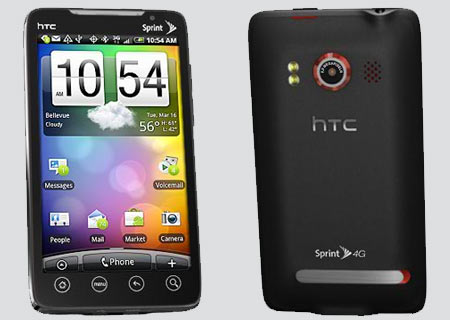 The Sprint stores revealed the availability of the HTC EVO 4G a few days back claiming it to be the first 3G/4G and WiMax-enabled phone available to U.S. consumers. This Android-based handset has now been revealed to break all the sales charts for Sprint in the U.S market. According to the company, consumers were much anticipated to learn more about the EVO.

The company declared that users were in great spirits to buy this handset and were seen lining up several hours before they opened their doors. This device claims to mark the highest sales of a single phone sold in a day ever for Sprint. This phone is said to have overtaken the Samsung Instinct and Palm Pre that held the record previously.

Dan Hesse, CEO of Sprint remarked, “HTC EVO 4G is a clear winner for customers with the powerful combination of an amazing multimedia experience in 3G coverage areas that becomes even better in our growing number of 4G markets. It is terrific to see customers react so positively to this device and the innovative experience it brings to them.” Kevin Packingham, Senior Vice President- Product Development for Sprint said, “HTC EVO 4G has more than lived up to our expectations that it would be one of the most anticipated technology products of the year,” and added, “We are working closely with our partners at HTC to increase the supply and get EVO 4G into the hands of everyone who wants one as quickly as possible.”

The increasing sales of this phone additionally led to a temporary shortage of this device at some of the 22,000 sales locations across the United States. The outlets like Sprint retail stores, national retail partners includes RadioShack, Best Buy, Walmart and indirect dealers all went out of stock for this handset. The company is said to be working round the clock to increase the availability of this handset across all the sales channels.