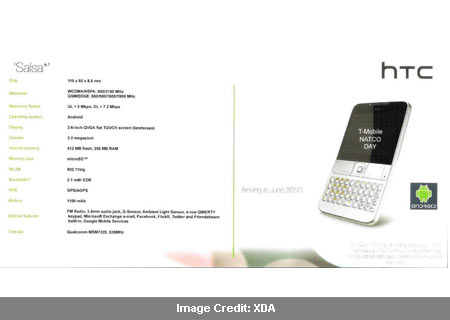 Android enthusiasts eagerly waiting for innovative handsets can now look forward to HTC handsets which were recently leaked and are expected to reach markets by the first half of next year.

According to Gizmodo, five Android handsets are revealed and the devices are divided into four product categories including design/lifestyle, performance, productivity and social. The design/lifestyle category features two handsets namely Legend and Salsa which are expected to ship by March and June 2010, respectively.

Further, the Performance collection includes Bravo that boasts of a 3.7-inch OLED capacitive touchscreen display. Apparently, the Bravo packages a Snapdragon QSD 8250 1GHz CPU, a 16GB MicroSD card in-box and a 1400mAh battery. The Social category features Tide and Buzz, which will roll out in April and May 2010. HTC’s Photon, Trophy and Tera seem to be driven by Windows Mobile 6.5 Operating System. The HTC Photon and Trophy will be made available by April and May next year respectively. However, the availability details of the Tera are not yet known.

The pricing details of these handsets are not yet made official. So stay tuned to grab the latest details.