Hike Messenger has rolled out version 3.5 of its app for users of the Windows Phone 8.1 platform. The final version of the update has come out just a month after the company announced it was in the beta testing stage of development.

Windows Phone 8.1 consumers of Hike Messenger will now be greeted with a revamped user interface and 10 new chat themes. They can also send large attachments measuring up to 100MB in size. These can vary from MP3s, PDFs, ZIPs, Word Documents, PowerPoint presentations and Excel spreadsheets. 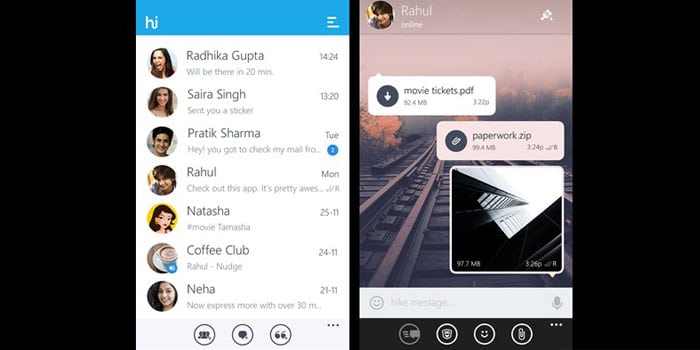 India-based Hike has granted people the ability to add 500 members in a single group. It’s also made it easier to manage such massive gatherings by allowing for multiple admins within a collective. These managers have been blessed with more control, as they can now limit the right to add new members to themselves.

Other than the standard bug fixes, Hike 3.5 comes with the power to mute individual chats. It further boasts of enhanced privacy settings. Users may choose to hide content from the push notifications they receive. They can even hide chats by protecting them with a password.

Most of these changes were first seen in the Android version of Hike. Version 4.0 of the app was launched back in August this year. Since it was released, the application has apparently seen over 30 billion messages getting exchanged on a daily basis. It crossed the milestone in November 2015.

The figure is a 50% growth over the 20 billion missives which were swapped among the tool’s 70 million strong user base in August 2015. The Windows version of the app still doesn’t seem to support Hike Direct, the new feature which allows people to send messages to each other without any net connectivity.

You can download Hike Messenger version 3.5 via the Windows Store.