Hike Direct is a new feature in the popular messenger app which works without data, meaning users don’t need the internet for it to function. What’s more, it doesn’t restrict the contents of messages to texts only, but allows for exchange of stickers, photos and heavy files. The big catch is that only those within a 100-meter radius of each other can connect via this option built into the latest version of Hike Messenger.

It’s available on Android at present, and iOS as well as Windows will have to wait until next year for it. Hike Direct is based on Wi-Fi Direct technology, completely bypassing cellular networks or Wi-Fi hotspots while setting up a peer-to-peer connection between devices. Apart from this roll-out, the company recently announced the addition of sticker suggestions, 100MB files sharing, new themes, the ability to hide private chats, more photo filters and doodles, 500-member groups with multiple admins and more. 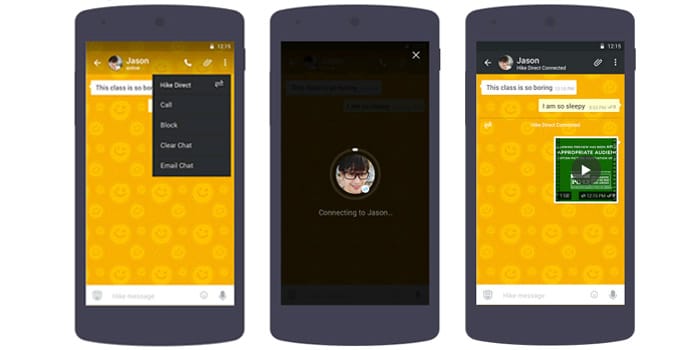 Hike Direct is capable of letting users exchange 100MB data within 10 seconds or less. Chatting and sharing files at speeds of up to 40Mbps is also possible through this feature. As you can see in the image above, the menu on the upper right-hand side of the Hike Messenger application offers to hook up you and your friend to the Wi-Fi Direct-enabled option, even if you don’t have an internet connection. It’s a great alternative for transferring content wirelessly when you’re on a spotty data network or are running low on balance.

It’ll be interesting to see how many of Hike Messenger’s 70 million users save up on internet charges by falling back on Hike Direct. Follow this link to download it from Google Play Store. The company recently announced that 20 billion messages per month were being sent over the service, crowning it the second most popular messaging tool in India.