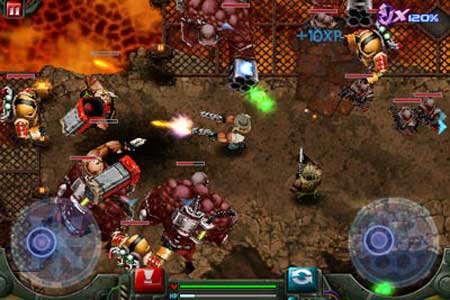 Not so long back, Glu Mobile had introduced Toyshop Adventures for the iPhone. The developer has now pulled out another title from its kitty entitled the Gun Bros App. It houses simple gameplay mechanics endowing players with an amazing and enticing way to pass time.

This free-to-play app features a plethora of over-the-top-guns, armor and power ups. Probably set in a couple of centuries ahead of ours, Gun Bros introduces the Freakishly Rugged Advanced Genetics Galactic Enforcement Division better known as F.R.A.G.G.E.D. This division has created special agents called the Gun Bros, whose mission is to liberate the galaxy from T.O.O.L or Tyrannical Oppressors of Life.

“We worked hard to deliver an innovative shooter that will appeal to core iPhone and iPod touch gamers as well as casual ones. We think Gun Bros will truly appeal to everyone looking for an action shooter with rich social elements,” commented Giancarlo Mori, Chief Creative Officer at Glu. “Attention to not just great gameplay, but to memorable characters and innovative design, makes this action game app unforgettable and addictive.”

The title even includes a social option which lets gamers add-in friends and players from all over the world with Apple’s Game Center. On the volcanic planet of Cerberus Prime, gaming aficionados have to combat hundreds of enemy waves across ten revolutions. As they shoot their way through the endless hordes of T.O.O.L, iPhone owners can gain experience and procure the valuable Xplodium ore.

Additionally, iPhone owners can level up their Bro to be able to access 30 guns from 6 different weapon classes, a multitude of potent Smartillery power ups and 50 armor pieces. They can even boost their gameplay by inviting their friends’ Bros to fight as brothers in arms. With their upgraded gear, these Bros could be useful to the player. By inviting their freinds to play, gamers earn special rewards. In fact, even their friends will earn experience as they fight with them.

Gun Bros can now be procured for free world over from the App Store.