Don’t you love the new Google Doodle for March 21 celebrating spring and wishing everyone Navroz Mubarak at the same time? Navroz stands for the Iranian New Year which kicks off the Persian calendar and sings about the start of fine weather too. Well, if you live in India or any other region on this part of the hemisphere, we can understand why all this talk of spring isn’t bringing you joy as you wipe the grimy perspiration off your face with your smelly handkerchief.

Google’s certainly been in a good mood over the past two days seeing as it has released multiple doodles bursting with color. On March 20, European countries such as the UK, Germany, France, Italy, Norway and so on, were treated to a colorful sketch of spring flowers in full costume. 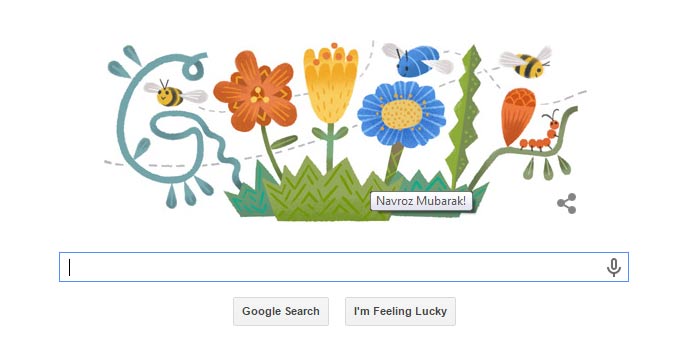 Since it was also the day on which this part of the world came under the spell of a total solar eclipse, the rare celestial event was illustrated befittingly within the drawing. On the said date, those who got to the Google landing page from anywhere else in the Northern Hemisphere, saw the same picture.

The only difference was that the darkening sun in the center was swapped for a yellow flower. And a bumblebee was seen buzzing around happily in the frame. Today’s Google Doodle (first image) shows yet another version of spring flowers, bees and a creepy caterpillar. It is visible in the Indian subcontinent.

Google’s Kirsten Lepore has also lent her creative talents to a stop-motion animation doodle of a squirrel flitting behind gourds representing each of the letters in the company’s logo. It marks the first day of fall for the Southern Hemisphere and can be seen by Internet users in South America.