Google has ambitious plans to empower 50 million women in India with the help of the internet by getting them online. And that too, within a span of one short year. Well, Mountain View’s never been known to do any project half-heartedly, so we were expecting the company to kick off the campaign with all the necessary fireworks.

Sure enough, there’s this endearing video about an ‘internet mom’ titled Stay Informed, that has been posted on YouTube as part of the initiative. Scroll down to check it out, if you please. Other big brands covering Axis Bank, Hindustan Unilever Limited and Intel are also lending a friendly hand to the project.

The campaign is reported to be based on research which claims that bringing the internet to Indian women means letting them express their views freely among other important things. Even one example such as Twitter’s @MrsGandhi, whose political views are followed keenly by many, should offer enough evidence in this direction.

Google has rolled out the Helping Women Get Online (hwgo.com) website which delivers useful tips on how to develop internet skills and hosts special content on cooking, managing finances, child care and other household tasks. It also features handy guides on computer basics, chatting online, dealing with email and more. 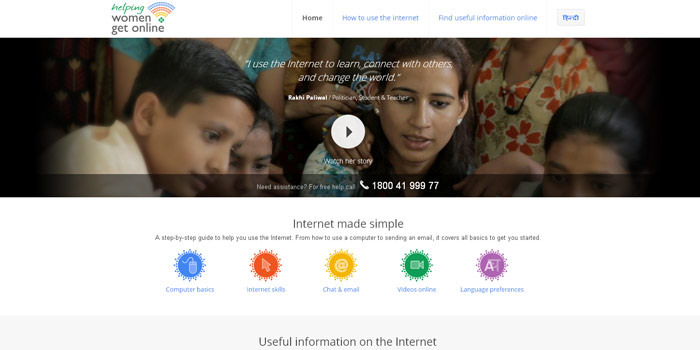 Placed prominently at the top of the page is a button for switching the website to its Hindi version. Lastly, Intel is working on an Android app called Easy Step that’s aimed at women. So how far do you think Google will get with this campaign?