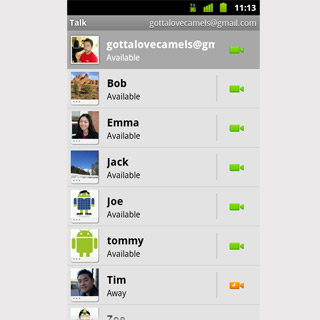 People who have been looking for a reliable medium to stay connected to their close families and friends may sound chipper on hearing this bit of news. Google has just launched the latest Google Talk application equipped with video and voice chat for Android users.

According to a recent post on the official Google Mobile blog, users can now voice or video chat with the contacts on their friends’ list just using their Android handsets. It enables users to make live calls over a 3G or 4G network provided the carrier supports it or via Wi-Fi.

The new flavor of the software includes a single voice or video chat button next to the user’s contact names in the chat window. In order to video chat with anyone using their compatible Android tablet or handset or PC, users simply need to tap on the aforementioned button to get started.

Google Talk overlays text chats across the user’s screen so they won’t have to close the video when chatting. In addition to this, the live video also automatically pauses in case people need to check something else on their phone’s homescreen.

As part of the Android 2.3.4 over-the-air update to the Nexus S smartphones, Google will soon start rolling out the useful Google Talk app with video and voice chat capabilities. The app will be further unleashed for Android 2.3 and higher versions in the near future.