Google has announced its intentions to provide flood alerts to people in India via its Public Alerts service. The initiative will provide warnings for 170 areas through data supplied by the Central Water Commission (CWC).

These flood notifications will get delivered via Google search results, Google Now cards in the brand’s app, the Public Alerts website and Google Maps. The project will offer information such as the details of the emergency, a map of the affected region and a rough timeline. It’ll also display useful advice on how to deal with the situation. 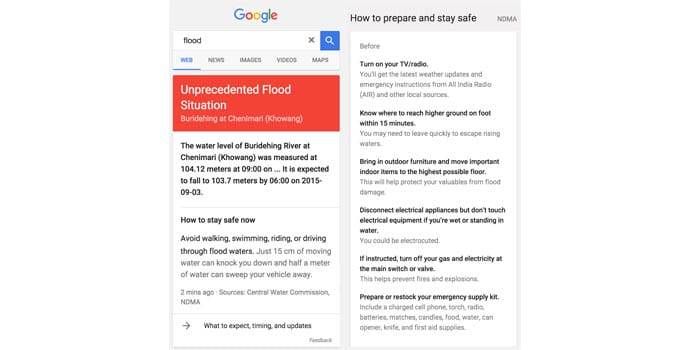 Google Public Alerts has so far concentrated on publicizing data like official weather reports and matters of community safety during disasters such as earthquakes or cyclones. The latter was only introduced in 2015 and is aided by data supplied by the India Meteorological Department. Users currently have access to facts such as the projected area of impact, time it will be arriving, and tips on how to stay safe and sound.

The new provision for flooding likely stems from the last year’s devastating Chennai deluge which had overwhelmed the city and had rendered it immobile. Firms such as Facebook had tried to help victims by activating its Safety Check feature to help people stay in touch and make sure their friends were out of harm’s way.

Google had done its part by setting up a crisis response page which sought to help those affected by the downpour. The crowd-aided effort had asked people to highlight flooded, traffic-heavy and safe roads on a map. It had also provided emergency numbers and relief center locations. Making such information available on a regular basis is a welcome step forward.