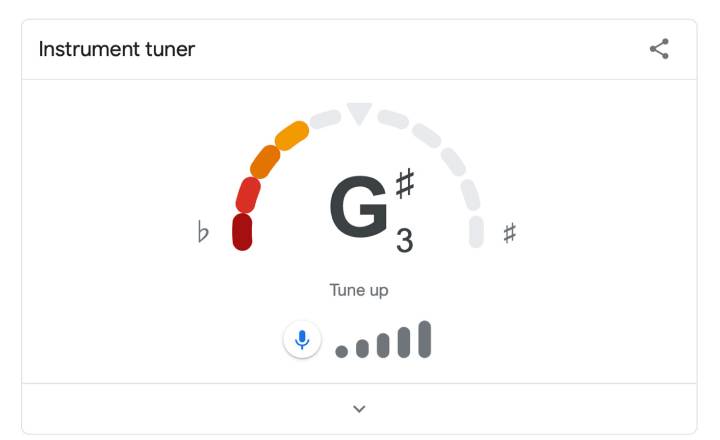 In its hunt to offer a diverse array of helpful features right within Search, Google has ended up equipping it with an instrument tuner. You can access it simply by typing ‘Google Tuner’ in the search bar, whether on your phone or your desktop. It works just like any tuner app, negating the need to download a separate app for the same.

Google Tuner has a similar interface to such apps as well. You play a particular string and it will identify the note you’re looking for while instructing you to ‘tune up’ or ‘tune down’ with the graphical interface. Do note that Google Search will need permission to use your microphone for this feature to work.

Not only does this impede the rise of guitar tuner apps but it also means certain doom for hardware guitar tuners that only remain the domain of professionals nowadays.

This feature was spotted by Android Police and it’s reporting that some devices weren’t able to pick up the guitar sounds properly. Seems like the ability of this feature depends upon how good your phone microphones are. The Verge tested it on an iPhone 12 and with a Windows machine connected to a Blue Snowball USB microphone and it reportedly worked great in both instances.

Google Search continues to be showered with new features and knick-knacks at regular intervals. Just last month, a Dark Mode was rolled out for the web version, while a new Personal Results tab was also introduced that lets you have your results customized and tailored to your history.

The company has announced an event that is to take place on October 19 and will see the launch of the Pixel 6 range that will run on its own Tensor chipset. Ahead of that though, the phones have been leaking left, right, and centre.