Owing to the need for a password before making in-app purchases, the Google Play Store 4.6.16 version is lawsuit-proof. To a certain extent, at least. For those who’ve been watching the headlines, Apple was forced to pay a $32.5 million fine to the FTC overs kids’ in-app purchases.

More recently, a concerned and annoyed mother filed a lawsuit against Google in a California court after she discovered that her 5-year old child had racked up a bill of $65.95 over in-app buys in the Marvel Run Jump Smash game. Once an application is downloaded, Play Store has a 30-minute window during which you don’t have to give a password in order to make an in-app purchase. 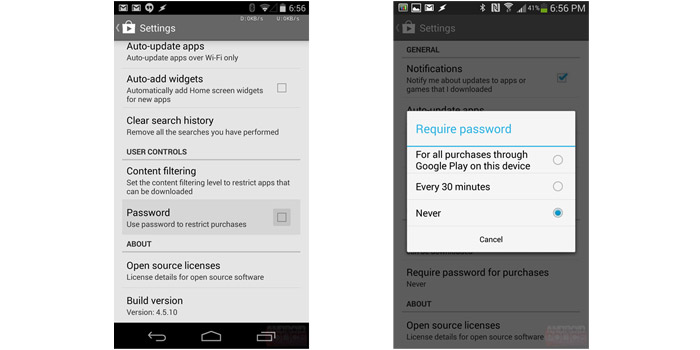 Android Police notes that this has changed with the Google Play Store 4.6.16 update. You can now adjust the settings to request a password for all purchases or simply every 30 minutes. Or you could also tweak it to not ask for a password at all, although we don’t know why you would be doing this. Also, a warning about in-app purchases pops up in the permissions list when you hit install for an application or game.

Remember the time we were talking about a Verify Apps feature that was coming soon? Well, it’s here with Play Store 4.6.16. The addition means that apps installed on your Android device will be continuously monitored for malware as opposed to being checked only at the time of installation. Settings and Help have been shifted to the slide-out navigation drawer, apps may be mass installed (but not uninstalled) and Play Store can be self-updated.