Google Play Music and YouTube Red could be making their way to India soon going by a fresh spate of rumors which has erupted online. The two streaming platforms haven’t officially made the leap to the country yet, but might do so now if the speculation turns out to be true.

A number of Reddit users have begun reporting that they can access Google Play Music via its web avatar. Quite a few songs and albums are now being displayed in INR rather than dollars. Going by the images below, one song may set you back by Rs 15, while an entire album might cost anywhere between Rs 95 to Rs 135. 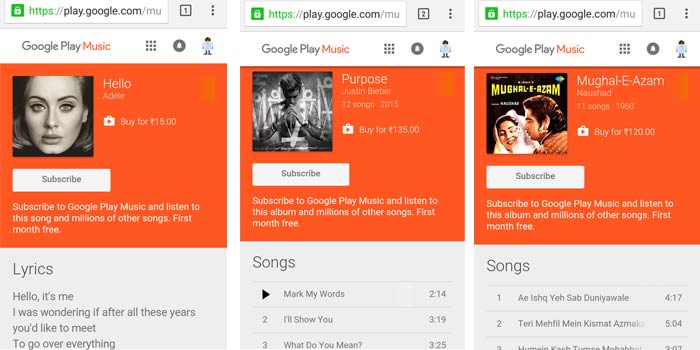 Selection appears to be varied, spanning Indian music like Lata Mangeshkar and the Bajrangi Bhaijaan album to global artists such as Adele and Justin Bieber. The music streaming market in India has grown by leaps and bounds over the years. It’s now dominated by domestic apps like Saavn and Hungama in the country, both of which offer regional music in several different languages.

Google Play Music will have its work cut out for it if it wants to be a success here. It’ll also have to compete with Apple Music. There’s no hint of how much a subscription to the former could cost in the nation. It’s priced at $9.99 (approx Rs 670) on a monthly basis in the US.

As for YouTube Red, a few Reddit users have begun getting notifications telling them about the service. It lets subscribers watch videos free of intrusive ads, download them offline, and keep them running even in the background.

Users of Google Play Music actually get free access to YouTube Red in the US, which would be a nice bonus if that offer stays intact for Indian consumers as well.